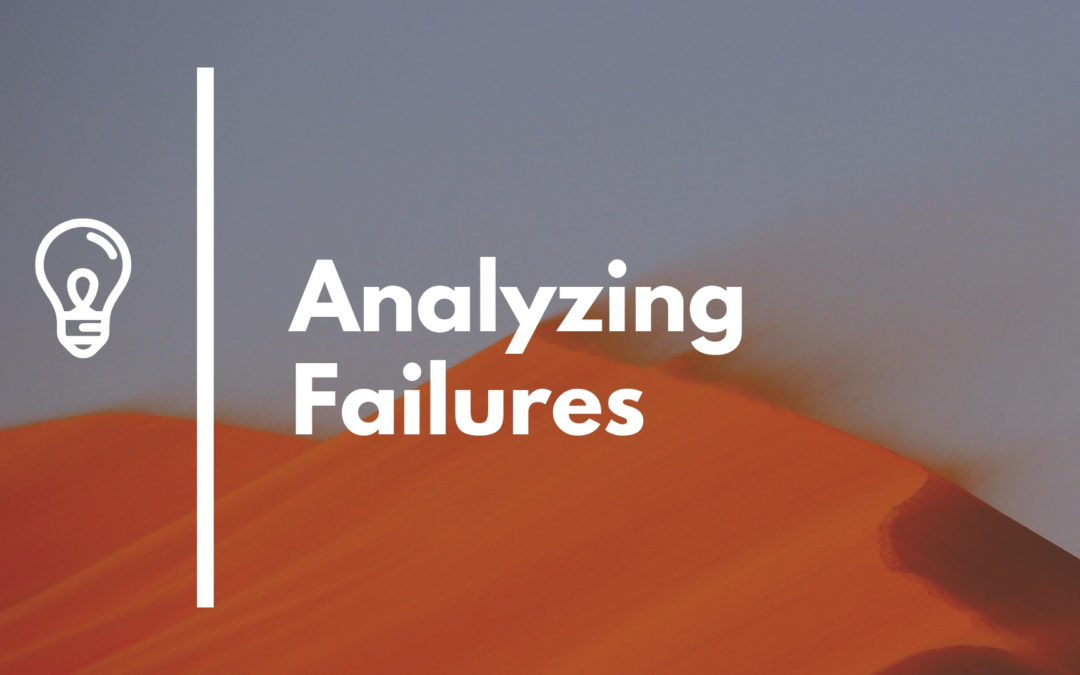 In time, we all get comfortable and complacent at our jobs. After the initial learning curve, we can begin to coast, using the same tools for years. As our confidence in our work grows, arrogance can creep in. This insidious trait can numb us to the feedback from others. As long as our paychecks keep coming in, we ignore our process falling apart and rely on the momentum that we built to carry us through our jobs. When your process falls apart, it’s critical to conduct a failure analysis of what’s going wrong.

It can take a particular “wake up call” incident to alert us to this process. That’s what happened to me this week.

For context, I’ve been selling cars for around seven years now. In less than six years I had grossed (before tax) over a million dollars in income, an amount of money that has profoundly changed my life. Of the four thousand salespeople in my brand, I was top 200 by year one, top 50 by year two, and top 10 by year three.

It was a steep climb to the top of the car sales food chain, bolstered by a successful partnership and supportive managers (plus a strong bull market). I’ve published an ebook and have a second one about to launch.

Life is good. Things have gone my way.

That is, until last week.

That’s when I realized that I was dropping the ball.

Here is my failure analysis.

Failure Analysis of My Conversation with Tio

Tio’s lead came on Monday morning, with a clear message:

“Shopping around for this exact car with the exact same features. Another dealer is offering this Q7 for 56k but doesn’t want to have to drive that far to get it. Can you offer a better deal? If so, I’ll go with you to save me the trouble of driving to the far East Bay.”

When I saw this, I was happy- what a great lead to get Monday morning!

I was excited to close up this deal. Not only was I confident that I would close this deal within the hour, but I also figured that I would be able to merely match the competitor’s offer (instead of beating it) since I could offer value outside of just price.

When I responded to the lead, Tio was at work and asked me to have our conversation via text, which worked for me since I could multi-task and answer other leads while closing the deal. 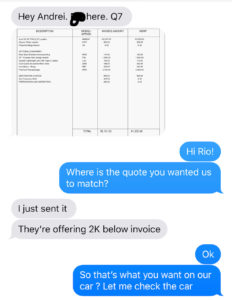 Tio sent me a picture of the invoice of the car that the other dealership had offered him and the price that they had provided. At this point in the conversation, my goal is to close the deal for as close to that number as possible as soon as possible to get him off the market. 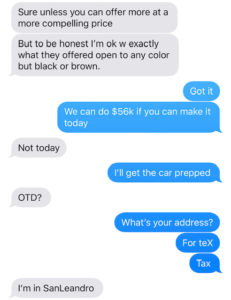 He almost immediately relents on pricing, telling me that “to be honest I’m ok w exactly what they offered open to any color but black or brown.” I patted myself on the back, relishing in how easy it was not to lose extra money to sell him a car.

The problems then emerged. I took things one step further, attaching my offer of matching their quote with a requirement (that Tio comes today). In my experience when I say this, customers will respond with the day they are free, and I will agree to honor the price on that day. This adds a little finality to the conversation.

Things are about to turn. 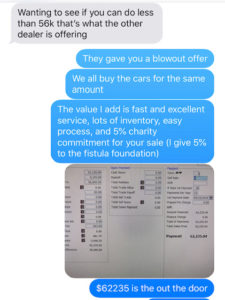 The conversation changes when Tio brings back his desire to “see if you can do less than 56k that’s what the other dealer is offering”.

At this point in the conversation, I have two choices:

Retrospectively, it seems that I decided to do #2 (poorly).

While I was confident that I could close this deal quickly and get a quick start to the week, I was blind to the facts- namely that I don’t know anything about this customer (and he doesn’t know anything about me!). I know that he is in the market for a Q7, he lives relatively close to my dealership, and he is flip-flopping a bit on what he wants.

I should have seen the warning flags in the short conversation. He started by saying that a “to be honest I’m ok w exactly what they offered” and then responded to my offer to match with a repeated request for me to beat it.

His change of heart speaks to the point that he is uncomfortable in this type of conversation. When he said that he was “ok w exactly what they offered,” deep down he wasn’t sure if this was a good deal. Since I agreed to the match so quickly, his insecurity in the deal crept back in. He worried that everything was too easy.

He feared that he was being taken advantage of.

If I were smarter at the time, I would have looked at the facts and decided to take a softer touch in my response. I could have explained in a few sentences why I didn’t want to offer more discount, and I could have said everything more graciously. Instead, I was very direct, which ended up not going over (as you will see below). 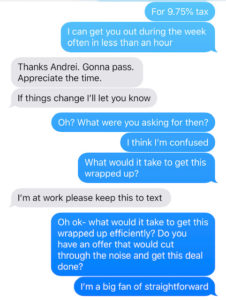 He immediately responds to my offer to match the other dealership with “Thanks Andrei. Gonna pass. Appreciate your time”. This response was my next warning that things had gone astray in this conversation. Something I had said had made him feel uncomfortable.

Failure Analysis: Doubling Down on the Wrong Path

At this point, I should have given him some space, perhaps calling him with a fresh, better offer around lunch time. That way I would have saved face.

Instead, the conversation got worse. I doubled down on a relatively straightforward close, asking him what it would take to “get this wrapped up efficiently.” The underlying message there was that so far this conversation had not been efficient.

Although this type of straightforward close will work with many people, it is liable to insult someone who has a bad impression of you.

The deal is about to fall apart. 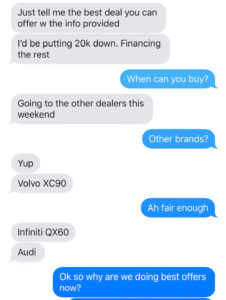 Looking back at this conversation, it’s apparent that I should not have continued this conversation to this point. When the customer says “Just tell me the best deal you can offer w the info provided” it’s a clear message that he was not happy with how things had progressed so far.

Again, instead of taking a moment to recoup, I forged on ahead. In retrospect, the very best thing I could have done was to turn the deal at this point. I could easily have had an associate or manager reach out with an offer and a fresh face.

I didn’t. Instead of seeing Tio’s responses as a sign of his frustration, I saw them as ineptness. At the time I just shook my head in bewilderment, confused how this customer can change his stories so quickly.

I was entirely lost by this point in the conversation. The reigns were out of my hands, and my autopilot took over.

I questioned why we were having this conversation in the first place (if he hadn’t yet decided on the vehicle), instead of seeing his deflection as a sign of something else. 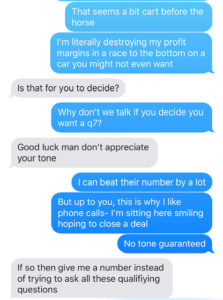 I’m sure you saw this coming. When Tio says, clear as day, that he “don’t appreciate your tone,” I finally realize consciously how badly this conversation has gone. I try to recoup by saying “No tone guaranteed,” but it was far too little too late.

Failure Analysis: Nail in the Coffin 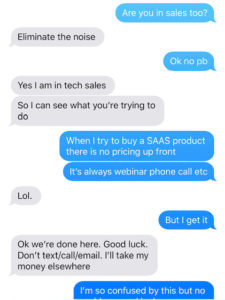 I have to say, my performance in this conversation was amateurish. Upon re-reading the thread, I can see the times where I missed his underlying messaging.

I get paid the way I do because I am typically good at closing a large volume of car deals. Much of that is process-based, but people skills are no less critical. We are not computer engineers, or surgeons, or architects. We are salespeople, and conversation is our programming language.

I find it incredibly useful to analyze conversations that go poorly since we can all learn so much from our failures. Failures give us an excellent opportunity to identify weaknesses and address them. Few things sting like losing an easy car deal.

In January and February of 2019, my sales surveys have been below the national average. This simple failure has cost me around eight thousand dollars in bonuses so far and will continue to cost me if I don’t address it.

In the car business, many dealerships attach survey clauses to their pay plans. Therefore, it’s incredibly important to review your pay plan and keep track of how your actions line up with the pay plans goals. I find it useful to pay attention to how much money you are losing by not aligning your actions. Your pay plan is your real boss! 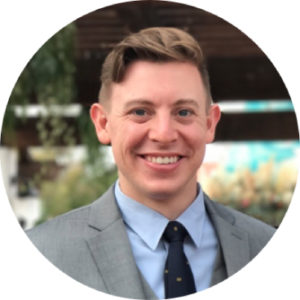 I’m here to guide you to internet sales and BDC mastery.

How to Sell Cars on the Internet is Available Now!